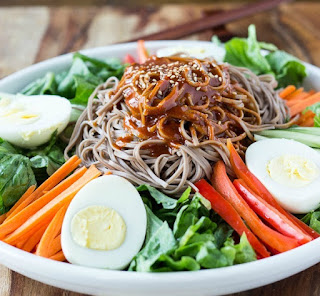 1. In a blender, puree the 1/2 Asian pear and apple until smooth then scrape into a bowl and stir in the gochujang, corn syrup, gochugaru, sugar, soy sauce, sesame seeds, mirin, pepper and garlic.
2. In a large pot of boiling water, cook the noodles until al dente. Drain, transfer to a bowl of ice water, then drain and let dry on paper towels.
3. Divide the cold noodles between two plates then top with the cabbage, cucumbers, carrots, onions, both leaves and bean sprouts. Drizzle each serving with 2 tablespoons of the sauce then top with a halved soft boiled egg. Leftover sauce can be refrigerated for up to 1 week.
Автор: Walden Stark на 10:54 PM