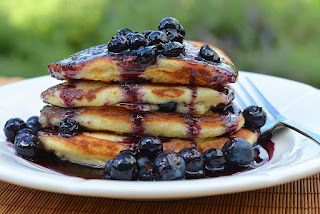 1. Make the cinnamon sugar topping. In a small bowl, combine the brown sugar and cinnamon. Set aside until ready to use.
2. Make the maple glaze. In a medium bowl, whisk together the confectioners sugar, maple syrup and vanilla extract. Set aside until ready to use.
3. Make the pancake batter. In a large bowl, sift together the flour, baking powder and cinnamon. In a separate large bowl, whisk together the milk, egg, honey, brown sugar and salt. Stir the wet ingredients in with the dry ingredients until well combined. Stir in the blueberries. Allow the batter to set for 15 minutes before using.
4. Heat a large skillet or griddle over medium heat. Spoon the batter on the preheated skillet, using about 1/4 c of the batter per pancake. Cook the pancakes on one side until golden brown. Sprinkle about 1/2 tsp of the cinnamon sugar topping on the uncooked side of the pancake, then flip the pancake over and cook until golden brown.
5. Drizzle the maple glaze over all.
Автор: Walden Stark на 5:32 AM