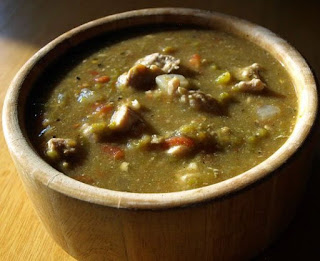 1. Preheat oven to 425 degrees F (220 degrees C).
2. Arrange the halved tomatillos, Anaheim chiles, jalapenos, onion and green bell pepper on a baking sheet. Drizzle the vegetables with 1 tablespoon of olive oil.
3. Roast the vegetables in the preheated oven until they begin to show brown spots, about 30 minutes. Allow to cool, then chop vegetables into bite-size pieces.
4. Heat 1 more tablespoon of olive oil in a large skillet over high heat and pan-fry the pork until browned, sprinkling the meat with salt and black pepper as it cooks, about 12 minutes. Transfer the pork cubes to a slow cooker and stir in the roasted vegetables. Mix in the tomatoes, garlic, beef bouillon cube, beer, oregano, parsley, cumin and chili powder. Set the cooker on Low, cover and cook until the pork is very tender, 4 to 6 hours.
5. About 1/2 hour before serving, place the cream cheese into a bowl and stir in about 1 tablespoon of the chili liquid until thoroughly combined. Continue stirring in chili broth, a tablespoon at a time, until the cream cheese is almost a liquid. Stir the cream cheese mixture back into the chili.
Автор: Walden Stark на 3:24 AM